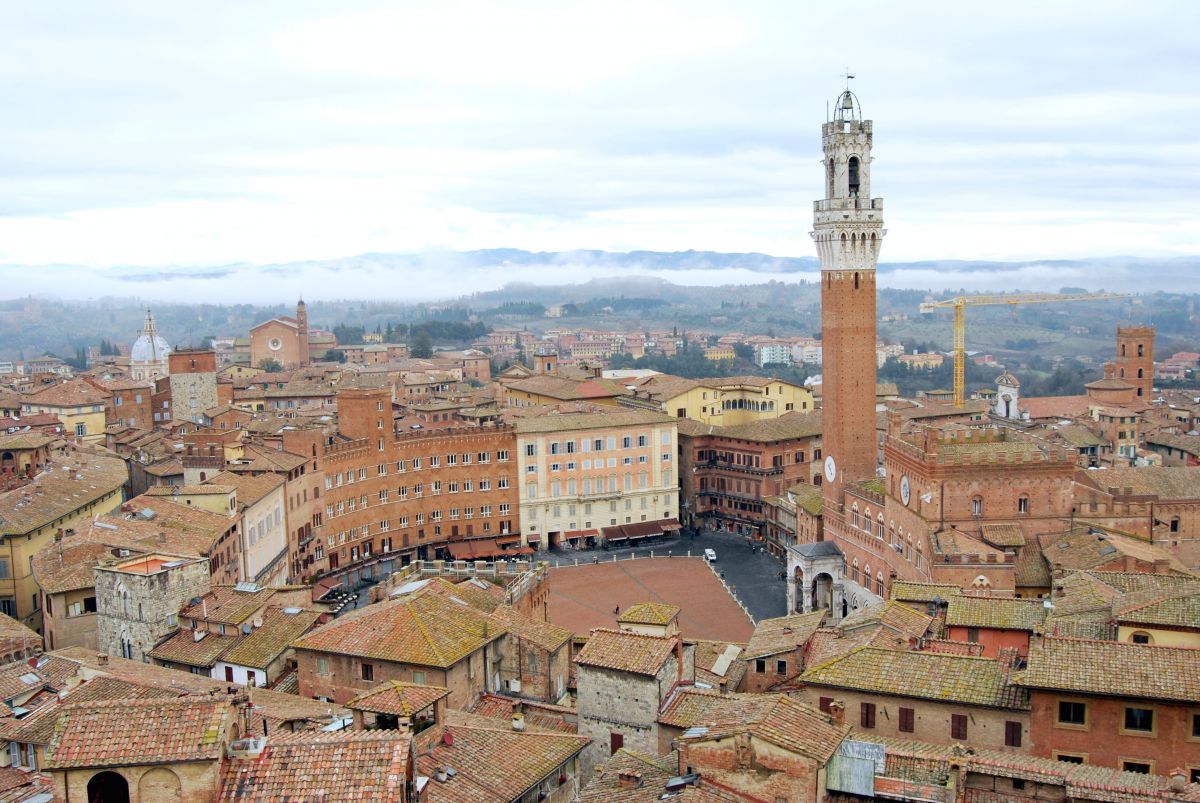 Siena is one of the most loved and visited cities in Tuscany, a place rich in history and art, but also in strong traditions, mainly linked to the districts and the famous Palio di Siena.

One day in the city is certainly not enough to live it in all its nuances, let alone visit all its treasures, but with a bit of organization, it is certainly possible to see the main attractions and appreciate their charm and atmosphere, restarting with the desire to visit it again. With this article we will try to guide you through the alleys of the city, lingering and appreciating the most beautiful monuments.

We suggest starting from Piazza del Campo, the heart of the city. Here on 2 July and 16 August each year the Palio is run: the horse race preceded by a splendid historical procession. At the end of the thirteenth century, the Nine Lords, who ruled the city, built the Palazzo Pubblico which, according to tradition, was inaugurated in 1310. All the other buildings that faced the Piazza had to follow a rule (1297) which forbade the construction balconies and provided for double or triple lancet windows. It is one of the first urban planning documents in the world. From the number of rulers derive the nine segments of the Piazza, which takes on a suggestive shell shape. Stop in front of Fonte Gaia which brought water to the city center in 1346, after almost ten years of excavation to create a "booty" that is a very long underground barrel-vaulted aqueduct. At the beginning of the fifteenth century the fourteenth-century source was replaced by that of Jacopo della Quercia, whose original marbles are now in the Museum Complex of Santa Maria della Scala. The current Fonte Gaia is a copy of Tito Sarrocchi (1869). We suggest you enter the Civic Museum, in the Palazzo Pubblico, the imposing Palazzo that dominates the Piazza, refined by the elegance of the Torre del Mangia. The Palazzo, symbol of the independence and wealth of Siena, is one of the most important examples of civil Gothic architecture in the world and a treasure trove of art masterpieces. Some of the most beautiful rooms belong to the Civic Museum and are open to the public: the Sala del Mappamondo with the Conquest of the castle of Giuncarico, the last work of Duccio di Buoninsegna (1315-1320), the Maestà (1315-1321) and the Guidoriccio ( 1328-1329) by Simone Martini. There are the internal chapel, the Sala del Concistoro and the Sala della Pace with the images of the Good and Bad Government frescoed by Ambrogio Lorenzetti (1338-1339) where it is possible to see the medieval city with its shops and its artisans. At the center, the Allegory of Good Government, a woman dressed in white lying on an armor is the universal emblem of peace chosen by UNESCO. Consider also the possibility of a visit to the Torre del Mangia (1325-1349): climbing over 400 steps - the Tower is 87 meters high - a spectacular panorama of the city and the territory will compensate you for the effort. From Costarella dei Barbieri coming out of Piazza del Campo, take Via di Città, one of the main streets of the center, full of beautiful buildings, shops and shops. Look out over the courtyard of Palazzo Chigi Saracini, rich in history and home of the Chigiana Music Academy, one of the most prestigious specialization schools in the world, where musicians of the caliber of Abbado, Baremboim, Zubin Metha, Accardo have studied and taught. The courtyard is delightful, it gives fresh in the days of summer with, in the period of lessons, a pleasant background music of great level. The palace is worth a visit. At the end of via di Città take right on via del Capitano, up to Piazza del Duomo. The facade of the Cathedral, begun at the end of the thirteenth century by Giovanni Pisano, offers us all its spectacular beauty thanks to the recent restoration. On the right, in Piazza Jacopo della Quercia, are the remains of the "New Cathedral" that the Sienese tried to build before the plague of 1348 and the collapse of the ground forced them to abandon the project. The “facciatone” of the New Cathedral, accessible from the Opera Metropolitana museum by climbing 130 steps, offers a beautiful view of the city. The floor of the Duomo (entirely discovered and visible from mid-August to the end of October) is a "Bible for images" with 56 marble panels inlaid and graffiti executed between 1369 and 1547 to designs by great artists such as Matteo di Giovanni and Domenico Beccafumi. Inside the Cathedral many masterpieces: the Piccolomini Library completely frescoed by Pinturicchio, the pulpit by Nicola and Giovanni Pisano and works by the greatest artists of the time such as Donatello, Michelangelo, Bernini. In front of the Duomo the ancient Hospital of Santa Maria della Scala, one of the oldest in Europe, built along the Via Francigena to assist pilgrims going to Rome. Its establishment is due to the canons of the Duomo even if the legend speaks of the Sorore shoemaker who died in the year 898 AD. The pictorial cycle of the Sala del Pellegrinaio tells the life of the Hospital that was responsible for providing medical care, welcoming pilgrims and providing hospitality and education to abandoned children, called "gettatelli". Today the Santa Maria is a museum complex that houses the Library and Photo Library Giuliano Briganti, the Museum of Art for Children, temporary and permanent exhibitions. The basement houses the Archaeological Museum in a "labyrinth" of salt and tunnels dug into the tuff.

Find out how to continue your tour in Siena once you arrive at the Arcobaleno Hotel ...


Below is a link for more info on entrance fees and visits to the Duomo of Siena:
http://operaduomo.siena.it/it/visita/ingressi/